The Slippery Slope of Keeping Our Surfaces Safe in Winter

You are here: Home / Uncategorized / The Slippery Slope of Keeping Our Surfaces Safe in Winter 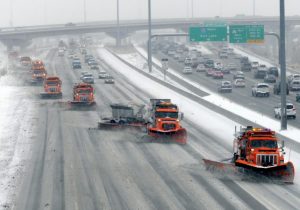 Who hasn’t been stuck behind a spreader and heard the pinging as the road salt hits your car? Or more recently, you can tell a storm is coming when you see the tell tale lines on the roads left from the brining trucks. These certainly help to keep our roads more safely traversed during a winter storm, but what is the impact that is left behind?

In the early days, rock salt was commonly used to treat the roadways. Essentially, rock salt lowers the freezing point of water, which inhibits the formation of ice. Sounds good, right? Unfortunately, that road salt (a.k.a. sodium chloride) has been known to kill trees and vegetation  on the roadside. It also can draw wildlife such as deer and moose to the roadways and roadsides – essentially it acts as a salt lick. The last thing we need is more wildlife close to the slippery roads. As you can imagine, this contributes to elevated rates of roadkill and damage to vehicles. Road salt can also make it’s way into nearby rivers, streams and ponds, negatively affecting the freshwater ecosystems and aquatic life.

Salt is also very corrosive. We’ll focus on the impact for your car in a moment, but let’s start with things like bridges, roads and other infrastructure. Columbia University reported in December 2018, “It’s been estimated that damage from salt corrosion alone may cost the U.S. as much as $5 billion a year. In 2015, Flint, Michigan’s municipal water supply was found to be contaminated with high levels of lead, a neurotoxin. Researchers linked this contamination to high chloride levels in Flint’s water, which had corroded lead pipes throughout the city’s plumbing system. The culprit behind the elevated chloride levels in Flint’s water? Road salt. Today an estimated 20 million tons of salt is scattered on U.S. roads annually—about 123 pounds for every American.”

While watching the salt shoot out of the spreader can be mesmerizing, it’s that bouncing that causes it to be ineffectively placed. Hence the development of brining! Brine is a liquid, so it stays in place and it’s cheaper for you as a taxpayer – or is it? Brine does a doozy on your car. It is usually a mixture of rock salt and magnesium chloride dissolved in water. It’s the magnesium chloride that is the culprit when it comes to your car’s paint and metals being eaten away. It dissolves in a lower humidity than rock salt, so the bottom line is if you are driving over brined roads, take the time to run through a car wash and don’t skimp – pay the extra for the under carriage wash. Your car will thank you for it!

By now most of us have seen the pet safe alternatives to the traditional ice melt products. Why the need for that? It all goes back to the same thing we’ve been discussing – rock salt and sodium chloride are no good for pets! Pets that walk on a traditionally treated sidewalk or roadway will have their paws coated in sodium and then will lick it off when they get home. They can also eat snow or drink from puddles that have been contaminated, too. The smaller Mr. Muffins or Fido is, the greater the impact. Wrestling them into booties helps, but if you are a homeowner, do the responsible thing and use a pet safe de-icer, and if you live in an area that is treated by a service provider, check to see what kind of product they are using.

While every state and municipality uses different products, we can protect our home’s water by installing a carbon system for potential chemical removal and with the addition of a reverse osmosis drinking water filter, can further remove the sodium from the water. If you have any questions about the quality of your water, or if you’d like a water treatment system serviced or installed in your home, contact EPA Water Consultants. We are your Eastern Pennsylvania and New Jersey Hague dealer providing service in towns like Pittstown, Perkasie and Pottstown, PA.

EPA Water Consultants have been working with homeowners, home builders and businesses for years throughout Pennsylvania and New Jersey to solve multiple water-related problems. Each install is completed by an EPA Water employee as if it was our home – no subcontractors! With our 100% water quality guarantee, EPA Water Consultants will provide the best water available to you and your home or business!