Bacteria in Tap Water: How Does it Get There and How Can Your Avoid It?

You are here: Home / Blog / Bacteria in Tap Water: How Does it Get There and How Can Your Avoid It? 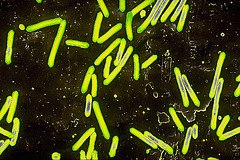 It might come as a surprise that bacteria is a concern for tap water. After all, we wash our hands in tap water with the intention of avoiding bacteria in the first place! As it turns out, however, bacteria can show up in many different forms in public and private water supplies. Today we’re going to talk about how bacteria gets into our water, the effects it has on our health and our homes and what you can do to remove it from the water in your Pennsylvania or New Jersey home!

How does bacteria get into tap water?

Water treatment plants are supposed to protect the public from waterborne illnesses that are brought on by bacteria, so how does bacteria end up in our homes’ water in the first place? The truth is that water treatment plants are not 100 percent reliable. They do their best to remove bacteria by chlorinating public water supplies, but certain types of bacteria can still make it through this process even if the treatment systems are working perfectly fine.

In addition, not every water treatment plant is completely up-to-date and reliable. Many plants around the country are in desperate need of updating, and treatment systems can occasionally break down.

According to the CDC, there are as many as 12 million cases of gastrointestinal illnesses annually in the United States that are brought on by tap water that’s contaminated with bacteria.

What kinds of bacteria show up in tap water?

Bacteria comes in a number of different forms. Some of the most common types of bacteria that show up in tap water supplies include:

How can you ensure bacteria is not in your tap water?

Since bacteria is problematic even for homes that have city water, the best way remove the contaminants is to install a whole house filtration system in your home. EPA Water offers a number of filtration systems that will keep your water bacteria-free at every shower and tap.

Don't live with unclean water... get a water softener today!